An Ipos/MORI poll of 40 countries in 2016 found public estimates of the size of Muslims in their populations to have little bearing on reality.

The estimate of what the size of the Muslim population would be by 2020 reached 40 percent whereas the number of Muslims in the EU is projected to reach 8 percent in 2030.

UK & Britain
In Britain, the public estimate of what the size of the Muslim population was 15 percent; the actual size was 5 percent. In the UK, a YouGov poll found that 56 percent of the English thought that Islam posed a threat to Western liberal democracy.48 percent do not believe that Islam is compatible with the British way of life.

Belgium
In Belgium, the Muslim population increased from 3.0 percent in 2005 to 7.6 percent in 2016. Estimates put the Muslim population of Brussels at 25 percent.
In the West, there have been reports of many forms of extremism, bomb plots, threats, cyber-attacks and random acts of terror. The perpetrators are home grown, they have been influenced by ISIS & It is this ideology that is encouraging the youth to join its dangerous cult.

France
According to a poll conducted by Le Figaro in April 2016 “63 percent of the French population believe that Islam enjoys too much influence & visibility, up from 55 percent in 2010 while 47 percent regard the presence of Muslim community ‘a threat,’ up from 2010 in 2010
In a 2014, a Bertelsmann Foundation think tank survey, before the Hebo Charlie massacre in Paris by Islamist gunmen a found that more than half of all Germans viewed Islam as a threat to their country and believe it does not belong in the Western world.

Germany
A number of polls & studies (2012) found less than 5 percent of Germans thought Islam is a tolerant religion and only 36 percent believed that Christianity and Islam can live together peacefully side-by-side.
53 percent think that there will always be serious conflicts between these two religions.
Only 29 percent of Germans say they agree with the statement “The Muslims who live here are part of Germany.”
A 2016 study by the University of Leipzig found that more than 40 percent of the public thinks the government should forbid Muslims from immigrating to Germany.

Italy
Italy, about 4.8 percent of the population compared with public perceptions of 25 percent, rising to 31 percent within four years.
A 2016 Pew poll found that some 63 percent of Italians had negative views of Muslims,
Italy ranks first in 2014 in ratings of EU countries having an unfavorable opinion of Muslims.
The government manifesto calls for the deportation of some half million undocumented migrants. 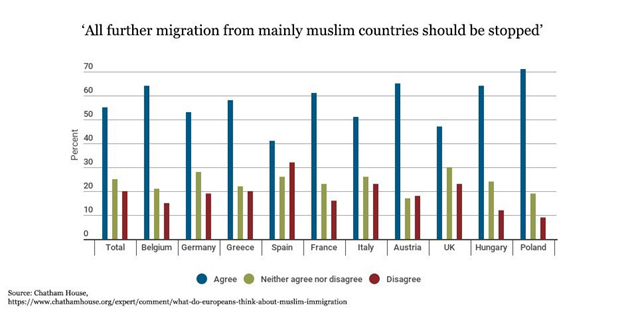 Click here for the full “Muslims in Europe: The Power of Fear” paper >>